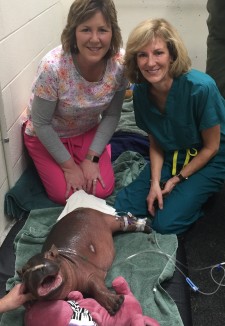 Sparks, Nevada, March 17, 2017 (Newswire.com) - When baby Fiona was dehydrated and in desperate need of intravenous fluid, veterinarians caring for the first premature hippopotamus to be born in captivity in the Cincinnati Zoo & Botanical Garden’s were at a loss. That is until the Cincinnati’s Children’s Vascular Access Team stepped into action employing a Neo Magic® device manufactured by Neo Medical Inc. in Sparks, Nev.

“Preemies have very tiny and unstable veins, and even though our vet team was able to get multiple IVs placed, the veins could not sustain the IV and would blow,” said curator of mammals Christina Gorsuch.

At Neo Medical, we value input from clinicians and focus our efforts on creating specialized products that address the unique challenges of caring for our patient population

Fiona weighed 29 pounds when she was born — a healthy hippo typically weighs 55-to-100 pounds.  In dire need of fluids, the VAT team members placed a life-saving Neo Magic IV catheter in her leg. Ultimately, this saved her life. The Neo Magic line of vascular access devices and accessories were designed specifically for neonatal and pediatric patients … until now.

“At Neo Medical, we value input from clinicians and focus our efforts on creating specialized products that address the unique challenges of caring for our patient population,” said Tim Duvall, CEO of Neo Medical.

“Now we can add baby hippopotamus to our very special patient roster!”

After receiving five bags of fluid, Fiona was on her way to recovery. According to zoo officials, she is still sleeping quite a bit but has started to take bottles and enjoy some carefully supervised activity.

About Neo Medical, Inc. is an innovator in vascular access and regional anesthesia medical devices. Noted for its high-value safety needle technologies and for its Neo Magic® line of vascular access devices and accessories designed specifically for neonatal and pediatric patients. As a boutique medical products company with a strong technological heritage, it maintains both FDA and ISO registrations in medical device manufacturing.